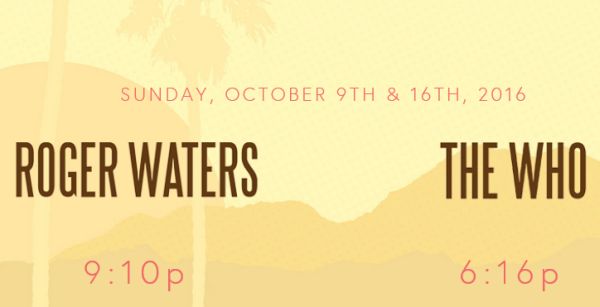 PS. Normally Roger Waters and The Who are "off topic" here on IORR, but Desert Trip is very much On Topic, with many many Stones fans attending all three nights with six performing artists at the Coachella site these two week-ends.

Anyone out there who knows how?
Options: Reply To This Message•Quote This Message
Re: Roger Waters and The Who Desert Trip Sunday 16-Oct-2016 live show updates
Posted by: sarahunwin ()
Date: October 17, 2016 04:30
[www.periscope.tv]

am only getting replays from those two links but no complaints, Pete is absolutely crushing it. Can't Explain into Seeker is all I've heard so far.

The Who exceeded all reasonable, and some unreasonable expectations. This is the good stuff. ;-) rock on!

I'd give the Who the win for this night. A little emotional to see them leave the stage.
Options: Reply To This Message•Quote This Message
Re: Roger Waters and The Who Desert Trip Sunday 16-Oct-2016 live show updates
Posted by: Hairball ()
Date: October 17, 2016 12:39
I'd agree with The Who getting the win for tonight .

Seriously the Desert Trip MVP goes to you, Hairball

Quote
DeanGoodman
I didn't see the anti-Trump pig floating over the audience this time. Some dudes in the pit waved an Israel flag.

I'd give the Who the win for this night. A little emotional to see them leave the stage.

you can't hide from that political shitstorm here in the U.S. and he makes his whole show about it,what a cringeworthy time that must've been.
attacking the jews,attacking a political candidate-not a good night of rock and roll,you could've stayed home and watched the news with a pink floyd album playing in the background and saved your money.
Options: Reply To This Message•Quote This Message
Re: Roger Waters and The Who Desert Trip Sunday 16-Oct-2016 live show updates
Posted by: The Sicilian ()
Date: October 18, 2016 01:09

Quote
Cristiano Radtke
With all due respect to Daltrey, but Pete is an amazing performer.

Who said he wasn't? In fact, I think Pete is a very underrated singer/guitarist, certainly one of the best in rock.
Options: Reply To This Message•Quote This Message
Re: Roger Waters and The Who Desert Trip Sunday 16-Oct-2016 live show updates
Posted by: bv ()
Date: October 18, 2016 02:38
Roger Waters will be around for a while. He just announced the new tour in the U.S. next summer. He do have his ways of getting a show to be brilliant technically.

The Who with Pete Townsend and Roger Daltrey is a totally different act. I remember many many years ago the UK papers said Pete Townsend went by the tube (the London underground metro) at the senior citizenship rate, What an amazing band!

Bjornulf
Options: Reply To This Message•Quote This Message
Re: Roger Waters and The Who Desert Trip Sunday 16-Oct-2016 live show updates
Posted by: DeanGoodman ()
Date: October 18, 2016 02:44

Quote
lem motlow
... what a cringeworthy time that must've been.

It wasn't too painful, and I wouldn't let the issue dissuade you from seeing his tour next year. There was a bombastic video montage on one song, a poem that no one paid attention to, and a quick shout-out to California campuses for their support of "BDS" - which I doubt most people understood. Of course we had the pig the first night.

Quote
sarahunwin
Anyone know how to save a Periscope broadcast or if it is even possible? I would love to save Wef's Roger Water's broadcast.

I think there are a couple of ways, here is a thread about one [iorr.org]
I never tried it, but I am glad when people do. If you do please post a link.

Quote
GlimmerGirl24
As the Zip Code tour was ending last summer, Katch appeared. Katch grabs the Periscope broadcast and stores it in the cloud indefinitely so the broadcast can be viewed.

If you sign up for Katch, there's three ways to move a Periscope broadcast to your Katch account:

1. Add #katch to the Periscope title.
2. Set your Katch account to auto-Katch and tweet the broadcast to Twitter when you begin Periscoping.
3. If you forget the first two, before the broadcast expires on Periscope, tweet the link to it with #katch and Katch will grab it.

Katch also preserves the comments and hearts from the broadcast.

Here's a periscope I recorded last summer of Sugar Blue at the Tawas' Blues by the Bay festival:

About 19 minutes in, Sugar Blue tells a story about meeting a couple of English boys.

Quote
Kurt
I realize that it's still early out there, but C'MON HAIRBALL!
GET UP AND WRITE ANOTHER "REVIEW"!

Seriously the Desert Trip MVP goes to you, Hairball

Ahhh thanks man I appreciate that.

When I'm away from my art studio, I tend unleash the creative juices by spewing it all out via writing ha.
Just made it home safe and sound awhile ago, and I'm currently at a temporary loss for words for the time being.
I'm all tapped out, torn and frayed, hanging by a thread, dazed and confused, and still trying to make sense of it all.

The Who kicked ass again big time, and as Dean mentioned it was little emotional to see them leave the stage.
At times it even looked like Pete had a tear in his eye...talking about the decades of memories, and blasting through another set that was filled with greatness.
And then it was over and off the stage they went, like victorious generals at the end of a very long battle that was 50 years in the making.

In between The Who and Roger I meandered to a different section of food stalls that I hadn't yet discovered - hard to believe after six days there was still something new to discover!
I ordered a delicious yellow Thai curry w/ chicken and rice, and it had JUST the right amount of coconut milk and fine blend spices to make it one of the best curry's I've ever had.
Even at a semi-overpriced $12.00, I'd order it again if I was still in the desert!

Roger Waters was great again, but at times a bit over the top with his politics (nothing new about that). It's part of his 'charm', and even though I don't agree with everything he presents, it's all part off the experience.
He's got gigantic balls to voice his opinions in a huge setting like this, and more power to him - he's a great artist no matter what. The spectacle of his gigantic screen is truly amazing, and one needn't have to get high in order to be transported into another dimension (I did take a hit off a friends spliff though lol). State of the art visuals and effects with a quadrophonic system that would disorient even the most stable person, it was one for the ages.
All in all, it was another fantastic brick in the wall of truly great concerts I've ever been to. The whole weekend (well, both of them) was something I'll never forget...it's all mind boggling!

ps - Roger Waters has an upcoming tour, and I would recommend seeing one of his shows at least once.