Quote
bv
Cuba is on an official embargo by USA, since 1960, i.e. from before The Rolling Stones were formed. This means US companies and private people are not allowed to do business with Cuba. If you use USA based tools they may pretend Cuba does not exsist. Like cruise ships, travel guides, booking systems and so on.

Try using web sites based in one of the many contries who do have trade and connection with Cuba, like Mexico, Canada, most European countries South and Central America etc. I.e. web sites with .cu .ca .mx .es etc in the web site domain names.
This is one of the reasons why the Stones will be performing a show in Cuba. It is not normal to have an embargo going for 66 years. The embargo is including things we take for granted, like life saving drugs for children and so on. Still, they have found a way to allow the best baseball players from Cuba into the US series.

A total of 97% of all nations on this planet have voted against the embargo. The UN General Assembly has, since 1992, passed a resolution every year condemning the ongoing impact of the embargo and declaring it to be in violation of the Charter of the United Nations and international law. In 2014, out of the 193-nation assembly, 188 countries voted for the nonbinding resolution.

I am sitting here in Mexico and watching the weather reports. They show the map with Mexico lower left, USA upper top, and Cuba lower right just under Florida USA, part of these three nations on this map. You may blank out this country Cuba of 11 millon people on the map and pretend they do not exist, but luckily more
and more people realize the fact that talking is better than blocking.

I am confused, I always thought there were no political posts allowed on Iorr and that is exactly what this is.

That is what I am saying.

Bv I was not pretending anything, I did not attempt to agree or disagree on any of your points. All I am saying its a political post ,which it is. No harm no foul, you always asked us members not to do that. I am glad there is a concert by my favorite band anywhere in the world. I hope everyone has a great time.
Options: Reply To This Message•Quote This Message
Re: Cuba Rolling Stones 2016 show - Confirmed For March 25
Posted by: a bigger nut ()
Date: March 18, 2016 17:49
As this is "Concert for Amity", the band should sell t-shirt and litho in CUP not CUC/USD.

Options: Reply To This Message•Quote This Message
Re: Cuba Rolling Stones 2016 show - Confirmed For March 25
Posted by: tryinginvain ()
Date: March 18, 2016 18:22
I really wonder what - if anything - they'll be selling there. Anywhere near normal prices are way out of reach for most Cuban's to buy. I'm guessing either....

1. Regular prices in CUC, in which case there will only be some tourists buying stuff

2. No merchandise for sale

3. Slashed prices, still in CUC to clear out remaining merchandise since it's the last show of the tour.

Says Icelandic Glacial CEO Jón Ólafsson, "It’s a really exciting cooperation, the band will drink our water, everyone back stage and everyone going to the concert. It’s also the first time that foreign water is available in Cuba.”

fantastic poster!
It'will be a great concert.
Options: Reply To This Message•Quote This Message
Re: Cuba Rolling Stones 2016 show - Confirmed For March 25
Posted by: a bigger nut ()
Date: March 18, 2016 22:20
Another question is whether the band do a fan vote.
I believe that most of local Cubans don't have a chance to connect internet and even don't know existing such a voting.

Similar case happend at ON FIRE Shanghai show. China has the biggest internet populations in the world but its authorities blocking facebook.
Options: Reply To This Message•Quote This Message
Re: Cuba Rolling Stones 2016 show - Confirmed For March 25
Posted by: Nate ()
Date: March 19, 2016 00:20

Quote
a bigger nut
Another question is whether the band do a fan vote.
I believe that most of local Cubans don't have a chance to connect internet and even don't know existing such a voting.

Similar case happend at ON FIRE Shanghai show. China has the biggest internet populations in the world but its authorities blocking facebook.

Maybe Mick can run around Cuba next week with a pen and notepad jotting down what people want to hear.

Quote
stargroover
One week to the gig.Can't wait to get out of this hell hole they call the UK,and catch the rays and see the boys!

Quote
a bigger nut
Another question is whether the band do a fan vote.
I believe that most of local Cubans don't have a chance to connect internet and even don't know existing such a voting.

Similar case happend at ON FIRE Shanghai show. China has the biggest internet populations in the world but its authorities blocking facebook.

Maybe Mick can run around Cuba next week with a pen and notepad jotting down what people want to hear.

He has a whole week to do it.

Quote
stargroover
One week to the gig.Can't wait to get out of this hell hole they call the UK,and catch the rays and see the boys!

The Rolling Stones concert in Cuba, have a very different symbolic connotation to the rest of the presentations that the band has offered throughout its 50 year history.
The Rolling Stones concert in Cuba, agreed on March 25 at 8:30 pm at the Sports City, will have a very different from the rest of the presentations he offered the band throughout its 50 years symbolic connotation of history. In this new installment of Sonora Carretera some Cuban musicians talk about the symbolism of this highly anticipated event for the first time will bring the Stones to the island, where they will above all a tour of the great classics of his repertoire.

Ivan Fariñas is the director and lead singer of the band Solar Wind. This Cuban group has been active as long as the Stones themselves. "That time we experienced in the ' 60s was something I will never forget me, very few knew of the Rollings. I heard the BBC on Sunday morning and when I first heard his music has stayed with me because he was a ringer for that unknown moment, but very sticky , "says Granma this old wolf rock and roll as she recalls when listening Satisfaction "I was pleased with the music I played as a rocker. Really saw the Rollings as something that opened my heart , "he says.

In one of the rooms of the Cuban Art Factory, guitarist Dagoberto Pedraja still not out of awe at the prospect of listening to musicians who believes, without mincing words, "gods of adolescence". "I do not think so yet. I have met other great musicians like the band Manic Street Preachers, David Gilmour (Pink Floyd) and The Dead Daisies, but for me it is very important to see the Rolling live. I am interested in guitar performance of Keith Richards and Ronnie Wood lot. People will find many sounds that might seem of percussion instruments, but they do guitars. That is a major contribution of Rolling ".

Ernán Lopez Nussa is one of the most prestigious musicians on the scene of Cuban jazz. He has won several awards Cubadisco and countless international awards. As usual it is about to go out to meet a broad agenda, but a couple of minutes is given away to talk about the Stones. "The concert of the Rolling explains many of the things that are happening. It is a visit that, indeed, should have made more time, but now also seems important to me. In my youth, the Rolling were not my favorite, I felt more inclined to Led Zeppelin and Purple Deed. But there is no doubt that this is one of the most famous rock bands. "

Anyone minimally trained in the events of the Cuban rock, you know that Zeus is one of the exponents of the highest caliber. The band, led by vocalist Dionisio Arce, has survived the poor promotion of this kind to continue defending the national metal with a quality that has been recognized internationally. The "Dioni" as it is known in the underground, remember that Rolling always been at the forefront of their influences from the time that integrated the ranks of vocalist Venus.

"In my career, the Stones have a huge influence. Since I left with Venus listened with Deep Purple or Black Sabbath. The stage projection of Mick Jagger was very shocking to Cuban singers and rock around the world, "he recalls.

When The Dead Daises recently traveled to Cuba more than a year, Roberto Perdomo, the leader of Tesis de Menta, shared the stage with two members of the Stones that made this super band, singer Bernard Fowler and bassist Darryl Jones. "Darryl and Bernard told me about the personality of each Stone. We were told Jagger and Charlie Watts (drums) were very adventurous and Keith Richards what he wants is to be happy and have fun. For my part, I began to hear them in the 80s and caused me great impact his songs. I remember I was in sixth grade when I first heard.

They had a projection and an influential image. There was no Internet and looked as out information about them and their records. Anyone who has heard Tesis know we have a lot of influence of their music and other classic rock bands. "

To Perdomo rock in Cuba he is going through a bad time. "I have nothing against bands do covers, (interpretations of classic famous groups), but the death of Cuban rock is there. There are many groups who choose that path for lack of creativity or economic problems and that means, ultimately, a step back in the evolution of rock. If the British, Americans or Argentines have left their mark on the rock it is because they have defended a repertoire with their own songs. If Silvio and Pablo are recognized it is world because they created a work that contributes to the world music scene. Cuban groups should not only covers but do interpret their own songs, because that is the only way to endure.

Perdomo says he had "filled with satisfaction to see a Cuban band sharing the stage with the Stones".

see you there friends from iorr

How many people can stand/sit/lay on this field/park/space in Havana actually?

Quote
Medzvel
WOW!
Rock photographer Jill Furmanovsky will attend the exhibition of his works on Wednesday, march 23 at 6:00 pm, in the Photo Library of Cuba.

British Photographer Jill Furmanovsky is excited to be flying out to Cuba to photograph The Rolling Stones at their groundbreaking 'Concert for Amity" in Havana on Friday March 25th 2016. Filmed by rock legend Chrissie Hynde, Jill sends a message to the Cubans before visiting the island. 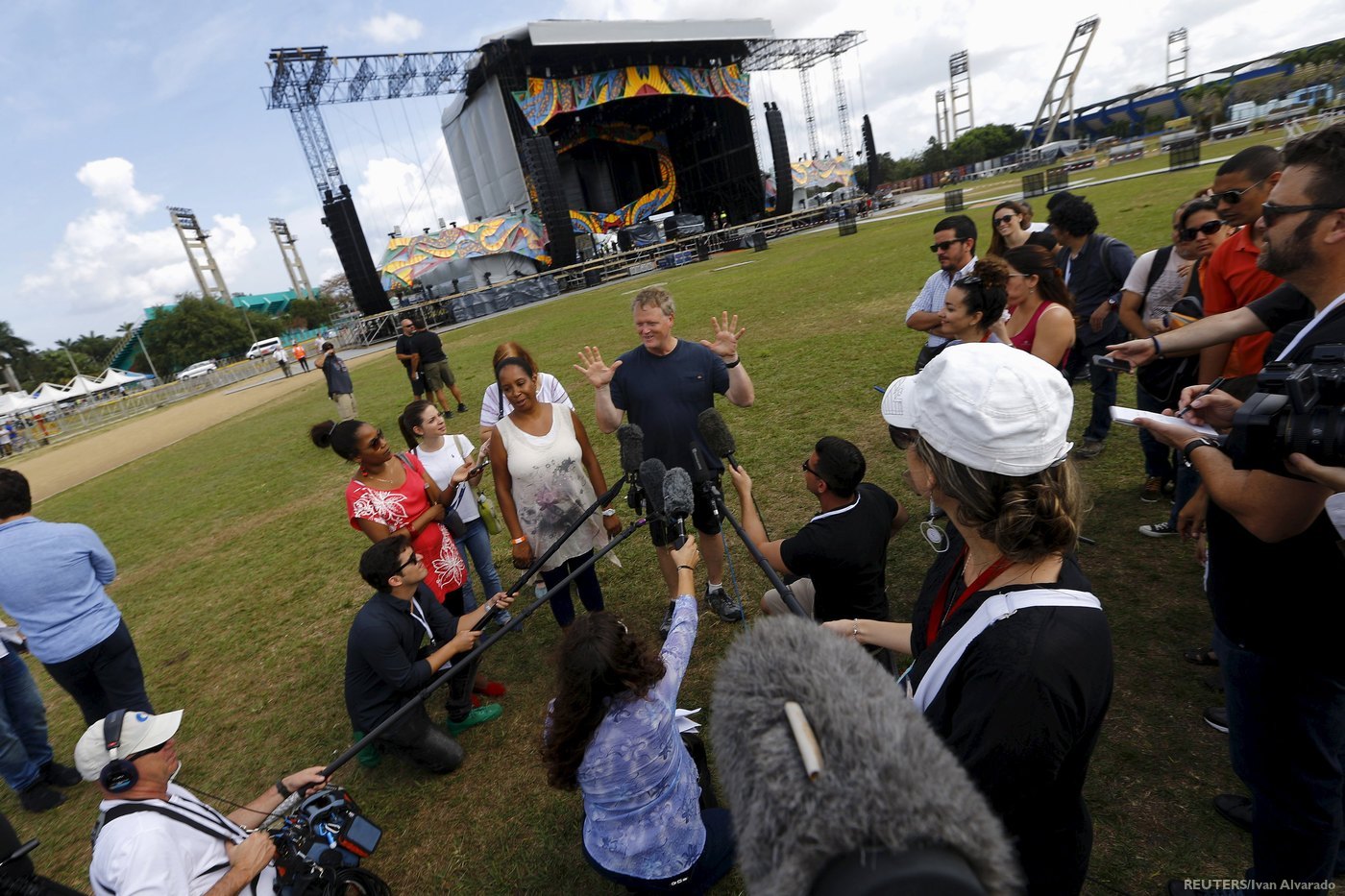 According to this tweet (it looks like this girl is a cuban journalist who was at the interview with Dale "Opie" Skjerseth) there will be no opening acts:

"The Rolling Stones will play without opening acts or guest artists."