Groupon Exhibitionism Deal
Options: Reply To This Message•Quote This Message
Re: The Rolling Stones Exhibitionism
Posted by: AlmostHearYouSigh ()
Date: November 30, 2016 20:08
I was there last Friday and its really great. I will probably go back in February with some friends since I am only a 2 hour ride away. You can take pictures in most of the Exhibit, the last two you are not allowed (the back stage area and 3D mini concert).

If at all possible you can get there and are on the fence, GO! its worth it....
Options: Reply To This Message•Quote This Message
Re: The Rolling Stones Exhibitionism
Posted by: TooTough ()
Date: November 30, 2016 20:26

Quote
TooTough
Really quiet here. I was hoping for more frenzy and reports
when Exhibitionism came to one of the world´s Stones cities...

Quote
Kurt
I tend to believe that the US would rather see The Rolling Stones LIVE onstage rather than boxed up in a museum. Exhibitionism Soft Cover Book: 15% off with the promo-code BACK2016 -- [rollingstones.shop.bravadousa.com] .
Options: Reply To This Message•Quote This Message
Re: The Rolling Stones Exhibitionism
Posted by: mickschix ()
Date: December 2, 2016 20:56
Glad to hear you can take photos. They said NO cameras at first but I guess it's too difficult to prevent with all of the cell phones in use!I hope to go very soon! Trying to figure out the best time! I hate snow!

For the show “Exhibitionism,” a curator brought together the band’s artifacts and reconstructed the rooms where the Stones worked and lived.

It is certainly possible to view “Exhibitionism,” the travelling show of Rolling Stones artifacts, costumes, and memorabilia which recently opened in the West Village, as yet another attempt by the group—whose most famous song is a stinging critique of consumerism—to wring every last dollar out of that big, lascivious tongue. (Tickets are thirty-five fifty; V.I.P. treatment is seventy-six fifty.) But for the true Stones fan “Exhibitionism” also gives satisfaction, and a good deal of it comes from the immersive environments created by the show’s curator, Ileen Gallagher.

A few days before the show opened, Gallagher, wearing a leather motorcycle jacket, was wandering through the event space looking for somewhere to sit.

“I know just the place!” she declared. Seventeen thousand square feet have been given over to “Exhibitionism,” which began at the Saatchi Gallery, in London, and will remain in New York until March. The idea was to create real-seeming historical rooms in which artifacts from the Rolling Stones’ archives could be “situated,” and to employ state-of-the-art sound, video, and set design to heighten the experience. The result is something between Madame Tussauds and Tracey Emin’s bed.

Here is Olympic Studios, where “Sympathy for the Devil” was created—Gallagher based the room on the film that Jean-Luc Godard made of the sessions. Here is the backstage area, where guitars are racked in the order in which they will be needed that night, and a stage manager’s tense voice is saying, over the intercom, “House lights down in five, four, three . . .” Geeky? Perhaps. Sneakily thrilling? Fasho.

Gallagher turned a corner and arrived at her re-creation of 102 Edith Grove, the one-bedroom flat in Chelsea where Keith, Mick, and Brian all lived together, with sleepovers from Charlie, for thirteen months beginning in the late summer of 1962.

Gallagher, who was born and grew up in Stuyvesant Town, has been a Stones fan since the early seventies. Finding the spot she was looking for, she perched on a couch in the Stones’ old sitting room. A 1958 Muddy Waters album sat on the table in front of her; there were beer bottles, and an ashtray brimming with butts.

She explained that she had honed her skills in the museumification of rock history as the director of exhibitions at the Rock and Roll Hall of Fame, in Cleveland, during the nineties. “The Rock Hall of Fame was the first to treat rock in a visual-culture way,” she said. “And MTV made that possible, because you saw the clothes, and it became about stuff.”

The problem with re-creating 102 Edith Grove was that there were no good photos of the interior. Gallagher relied mainly on her separate interviews with Mick, Charlie, and Keith, in which she recorded their memories of the place. (Visitors can hear these as they walk around the flat.) Mick recalled that “it smelled really bad and it was, like, people would be sick everywhere and they’d be, like, leaving dirty plates and dirty food.” Charlie noted, of Brian and Keith, “They were the laziest buggers in the world. They would never pick anything up, so the sink was always full . . . penicillin was growing.” That was because, as Keith explained to Gallagher, “we were too busy, you know, avidly learning how to be blues players and that was all we had time for.” Also living in the flat was James Phelge, a beatnik, who was the foulest of the lot. “We’d get back from a gig and Phelge would be standing at the top of the stairs saying, ‘Welcome home,’ pissing on you,” Keith told Gallagher. From this fecund bog sprang one of the greatest songwriting partnerships of all time.

So Gallagher made a mess. “But a period mess,” she noted, curatorially. “The bottles and crisps are all period.” The heaps of cigarette butts are not; they were smoked by the workmen who built the exhibition in London, and were told to save them. The only item in the flat that is semi-authentic is a wooden guitar, a Valencia—a replica of one that Keith lost. (Several exhibitions could be mounted from things that Keith has lost.)

“When the band saw Edith Grove, they were thrilled,” Gallagher said proudly. Richards, who has lived for some years on an estate in Weston, Connecticut, previewed the space in London. “I’m home!” he cried upon entering the pigsty. One note from Jagger, who now lives in a mansion not far from Edith Grove: “Get rid of some of those cigarette butts. It wasn’t that bad.”

Gallagher kept her eye on the workmen, who were putting the finishing touches on the squalor. “I just have to make sure they don’t clean up the wrong stuff,” she said.

[www.newyorker.com]
Options: Reply To This Message•Quote This Message
Re: The Rolling Stones Exhibitionism
Posted by: JerkyLittleGIJoe ()
Date: December 8, 2016 23:47

Quote
itsallovernow
I saw Exhibitionism Friday. Spent 3 hours and only left because I had someplace else to be. One word: AWESOME!

I'm hoping LA as well, but considering the boys might be heading to Europe next year, it would seem like the show might travel with them?

Tony Cochrane is the Executive Producer and man behind Exhibitionism – The Rolling Stones, delivered by DHL. We caught up with him to ask about his favorite artifacts (and experiences) of the show. This is his personal Top Ten…

[www.dhl-in-motion.com]
Options: Reply To This Message•Quote This Message
Re: The Rolling Stones Exhibitionism
Posted by: GS1978 ()
Date: December 23, 2016 03:12
Had a great time at Exhibitionism. Really is an amazing exhibit. Captures the essence of this great band. The music, the art, the clothes,the culture, the history. Everything. Spent 2 hours there and I'm definitely going again.

Here are a few pics. 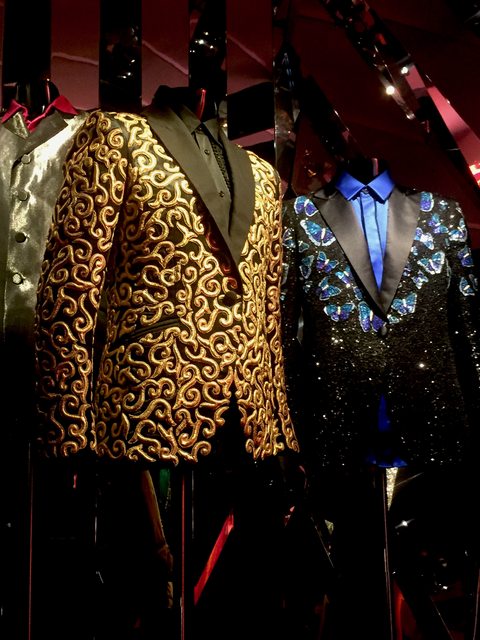 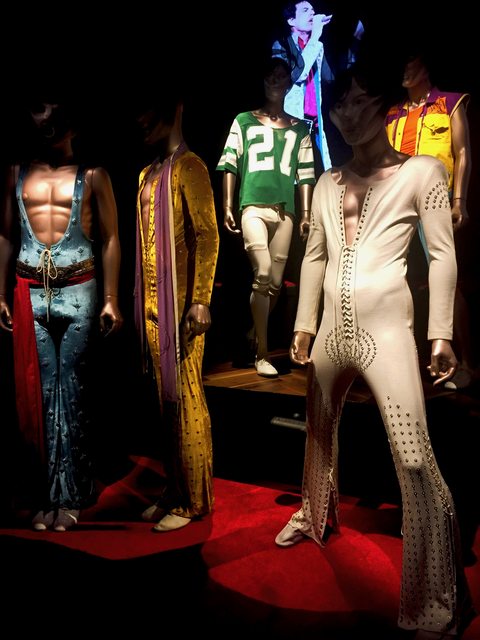 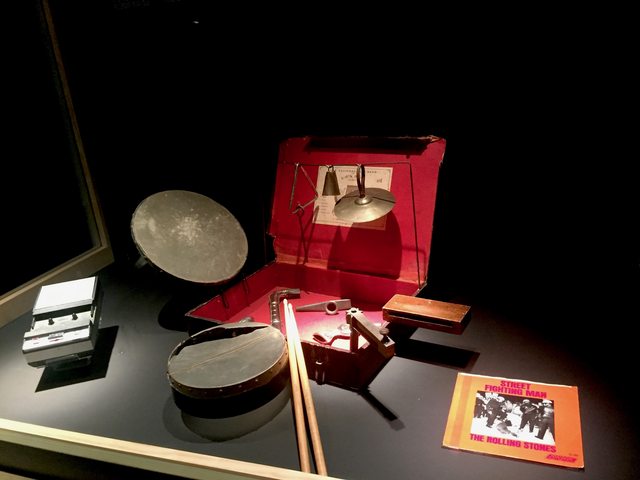 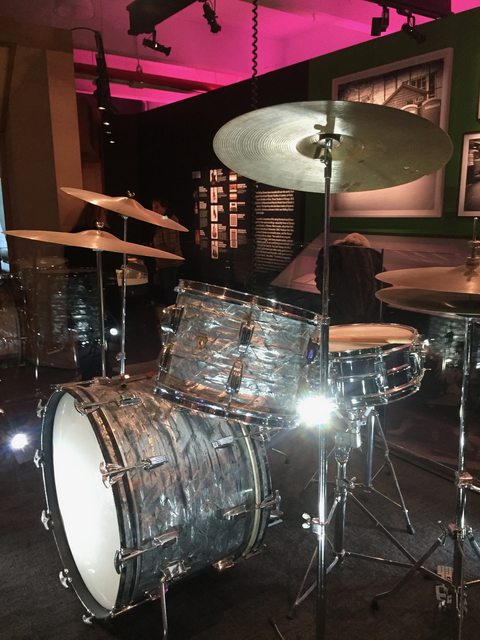 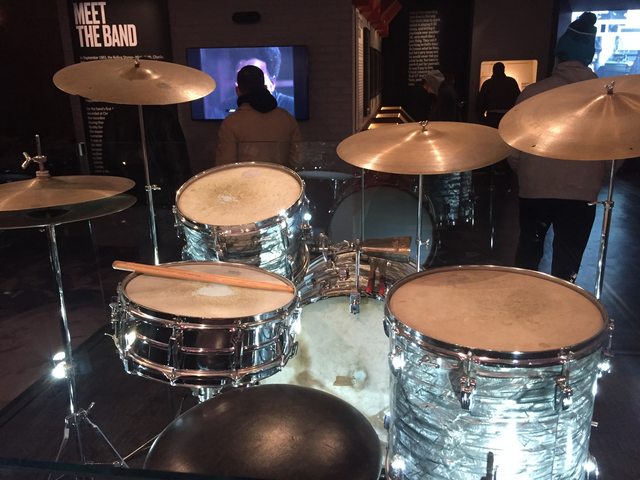 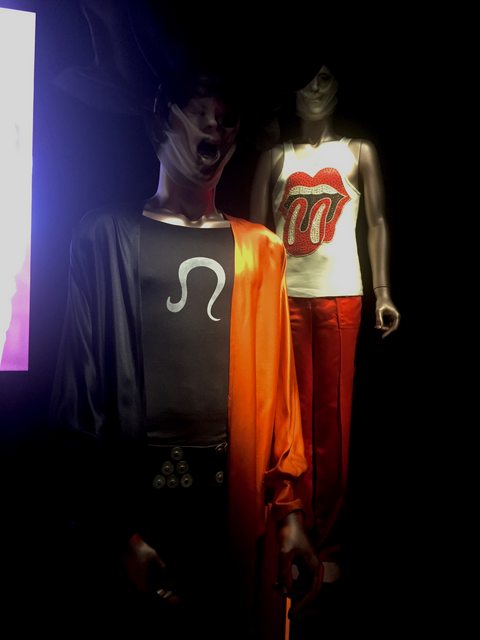 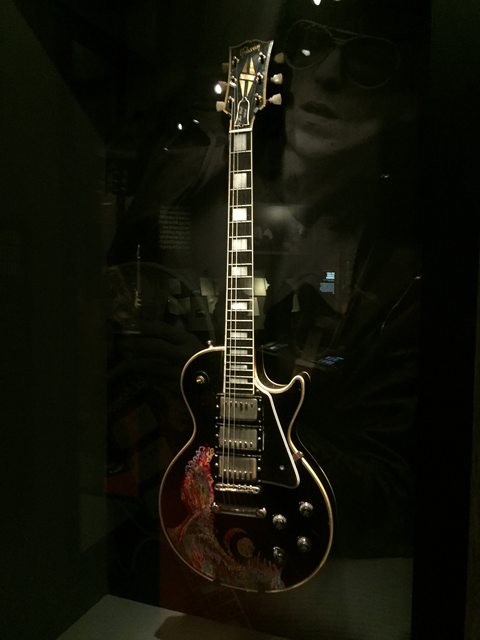 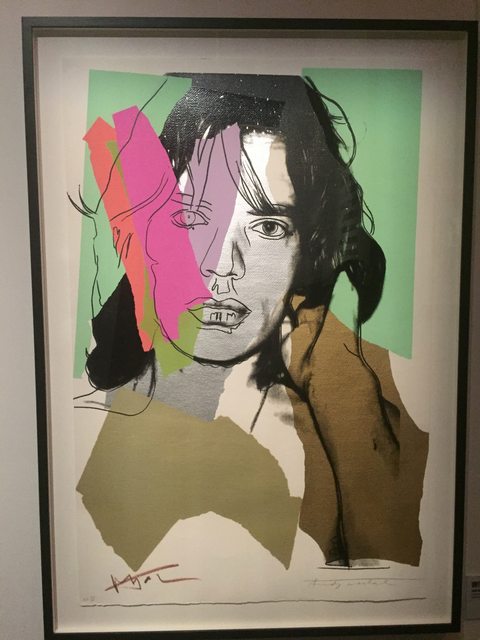 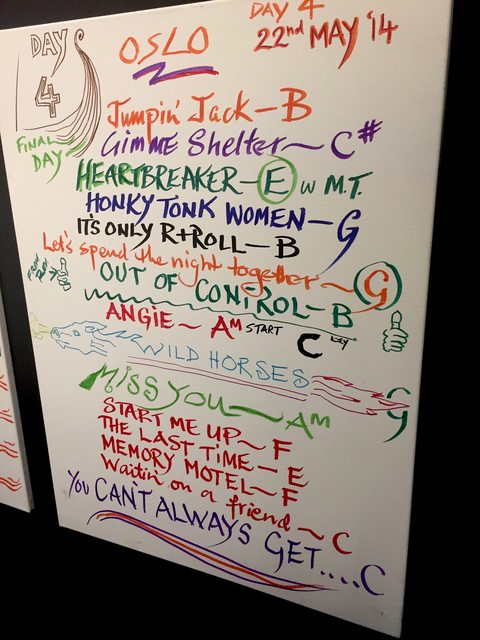 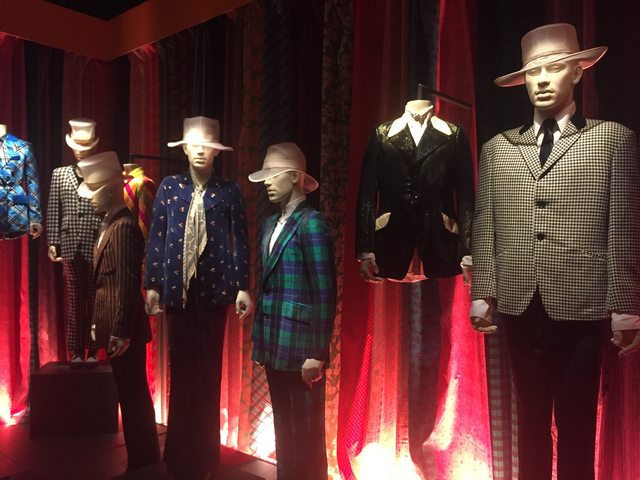 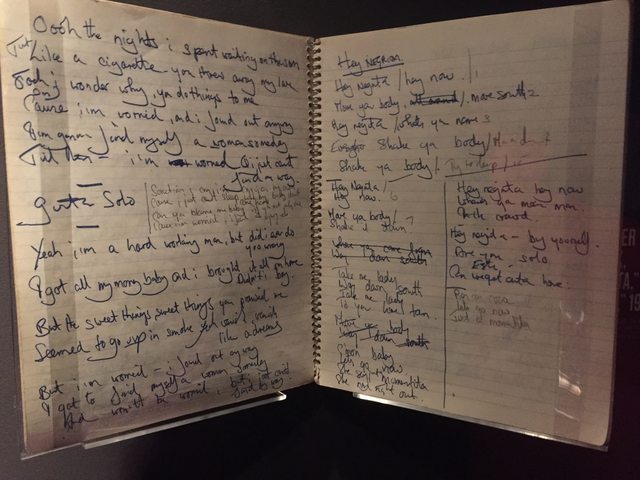 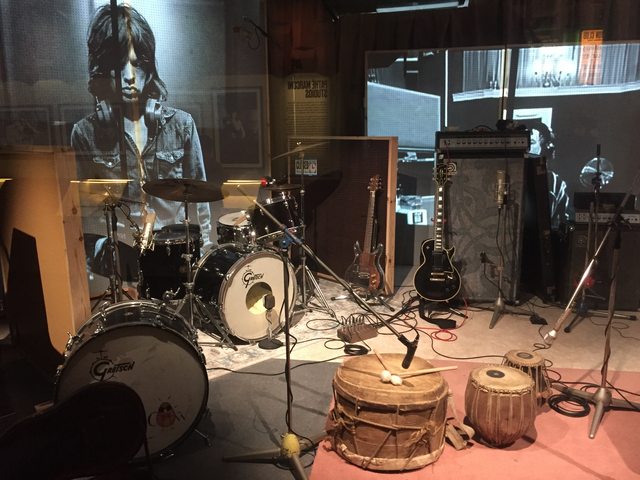 Quote
More Hot Rocks
Can anyone recommend a nice hotel close to the exhibitionism?

Edited 1 time(s). Last edit at 2016-12-31 07:22 by goinhome.
Options: Reply To This Message•Quote This Message
Re: The Rolling Stones Exhibitionism
Posted by: goinhome ()
Date: December 31, 2016 07:21
So I've done the obligatory searching first, so forgive me if I missed something. I was in the greater New York area for Christmas, and Exhibitionism was my very first stop in Manhattan when I was able to make it into the city on the 28th. Anyway, I was curious what the reasoning was behind the "no photographs" signs / policy in the "backstage" area as you waited for the 3D live performance at the end of the exhibit. My theory is that the guitars weren't the real ones (Micawber wouldn't be exhibited in an open area where you could step over a line on the floor and touch it, and the tele they had didn't look as battered as Keith's) and the Stones family didn't want photos floating around with fairly obvious replicas being displayed (thus discrediting the entire exhibit). Any thoughts?

That being said (asked), I was completely floored by the overall experience... What an exhibit!
Options: Reply To This Message•Quote This Message
Re: The Rolling Stones Exhibitionism
Posted by: mpj200 ()
Date: January 2, 2017 06:33

I believe Chicago may be next. Perhaps in March. LA may be after that.
Options: Reply To This Message•Quote This Message
Re: The Rolling Stones Exhibitionism
Posted by: with sssoul ()
Date: January 3, 2017 23:38

Quote
goinhome
... I was curious what the reasoning was behind the "no photographs" signs / policy in the "backstage" area as you waited for the 3D live performance at the end of the exhibit.

I'm not a photographing type of sssoul, but if I'm not mistaken
the "no photographs" policy applies to the entire exhibition.
It's just not especially strenuously enforced.
Options: Reply To This Message•Quote This Message
Exhibitionism - NYC...a question for anyone who has visited already
Posted by: HalfNanker ()
Date: January 3, 2017 18:06
What did you think of the "museum"?

To be more specific, I am thinking of going later this month and was wondering how much time to budget to get a thorough satisfying look. It seems to you buy tix based on your entry time. If I go after work; I don't want to be kicked out the door before seeing everything it has to offer (it looks like they close up shop at 9PM on weekends).

Thanks for your input!

I gazed upon Keith's les paul custom for ages both times I went. A lot of people just had a quick look and moved on. Maybe my constant in the way presence had someing to do with that though.

It was a twice in a lifetime chance to see it, so every part of that guitar got a good looking at!

<
Options: Reply To This Message•Quote This Message
Re: Exhibitionism - NYC...a question for anyone who has visited already
Posted by: His Majesty ()
Date: January 3, 2017 19:35

Options: Reply To This Message•Quote This Message
Re: Exhibitionism - NYC...a question for anyone who has visited already
Posted by: Crackinup ()
Date: January 3, 2017 21:47
I went about a month ago on a Monday afternoon ($30 tickets) and spent about 3 hours in the exhibit itself, but there was not much of a crowd at that time. As DEmerson said, it depends on how much time you want to spend reading the various descriptions. I spent a lot of time looking at the vintage instruments, stage outfits and album covers, and not so much listening to Don Was talking about the Stones in the studio.

In New York, the gift shop is across the street from the exhibit building. If you buy tickets in advance, I'm not sure you even have to stop there, unless you want to see how much they charge for putting the tongue logo on something.
Options: Reply To This Message•Quote This Message
Goto Page: PreviousFirst...4041424344454647484950...LastNext
Current Page: 45 of 73