Quote
apla
Do anybody know any Dylan oriented tracker, as [tangledupintorrents.com] is dead...

become a member of expectingrain.com – they have a rare recording section

btw.: the tickets for the Prague show I offered above are still available
Options: Reply To This Message•Quote This Message
Re: OT: Bob Dylan news and more
Posted by: loog droog ()
Date: March 19, 2019 20:41
Shake it up baby twist and shout....

[www.youtube.com]
Options: Reply To This Message•Quote This Message
Re: OT: Bob Dylan news and more
Posted by: Cristiano Radtke ()
Date: March 20, 2019 06:47
I don't remember watching these two live videos from the 1966 tour.

Quote
RollingFreak
They seem to have video from this tour, as it occasionally gets shown in various places. I wonder why they've never released everything they have from it. This is history. That version of One Too Many Mornings is sublime. Always been that way, and its even better with video and in color. Months before Bob Dylan released Blood On The Tracks in early 1975, a small number of test pressings were circulated, consisting entirely of material from sessions at A&R Recording Studios in New York City. (Dylan re-recorded five of these tracks in Minneapolis for inclusion on the final album.) Those original records were soon bootlegged, and the alternate history of one of Dylan’s most acclaimed works was born.
music label: Legacy/Columbia 2019

...i think they were recorded prior to what was released. it was revelation for me; i mean it stood on it's own VERY strongly; and with very engaging and lovely, but with hard emotional impact; beautiful complementary acoustic work variously.

the tour program is more or less the same as the previous years' one. With one difference of course: There is a photo/advertisment for the forthcoming 1975 recording box (but no release date):
see: [forums.stevehoffman.tv]
Options: Reply To This Message•Quote This Message
Re: OT: Bob Dylan news and more
Posted by: hopkins ()
Date: April 1, 2019 09:40
[www.rollingstone.com]

The Gilcrease Museum’s “Bob Dylan: Face Value and Beyond” will feature 12 pastel portraits – similar to the one featured on the 2013 archival release Another Self Portrait – by the rock legend. The art exhibit is also Dylan’s first since the massive, 100,000-item Bob Dylan Archives was donated to the University of Tulsa in 2016.

“It might seem like something of a curve ball to have an exhibit built around a series of paintings. But it’s really a kind of sneaky way to show what the archive truly is — something that showcases what a truly multifaceted artist Bob Dylan is,” Michael Chaiken, the curator of the Bob Dylan Archives, told Tulsa World.

“He’s best known for his music, but Dylan is also a writer of prose, a filmmaker, and someone who has been involved in the visual arts for decades. This show is an opportunity to explore all those different avenues of Dylan’s creativity.”

The portraits in “Face Value and Beyond” previously exhibited in London in 2013 and Kent State University in Ohio in 2016 before they were purchased by an Arizona couple who loaned the works to the Tulsa museum.

“One reason why this exhibit could only be done is Tulsa is that we have, with the archive, a wealth of supporting material,” Chaiken added. “When the ‘Face Value’ portraits have been shown before, there was no material that gave the portraits any real context. But here we’re able to highlight the fact that there is a precedent for those portraits.”

Quote
apla
Do anybody know any Dylan oriented tracker, as [tangledupintorrents.com] is dead...

Electric Ladyland has lots of Dylan stuff, but you need an IPv6 connection and patience!

What the working notebooks show, and indeed the archive itself, is how meticulous an editor of his work Dylan is, how his literary choices are almost always spot-on 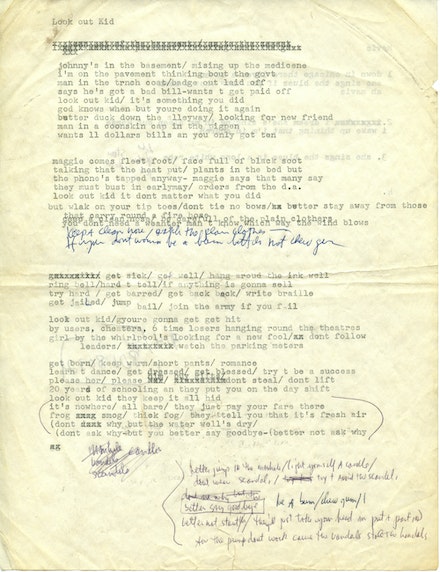