Well thats easy in my mind. A take my money situation. One of the greatest albums of all time.
Options: Reply To This Message•Quote This Message
Re: OT: The Who stuff
Posted by: Hairball ()
Date: November 15, 2021 21:02

The Who are one of the greatest and most musically complex bands to ever exist.
And as the mastermind of the band, Pete Townshend is a musical genius.

The Who are one of the greatest and most musically complex bands to ever exist.
And as the mastermind of the band, Pete Townshend is a musical genius. 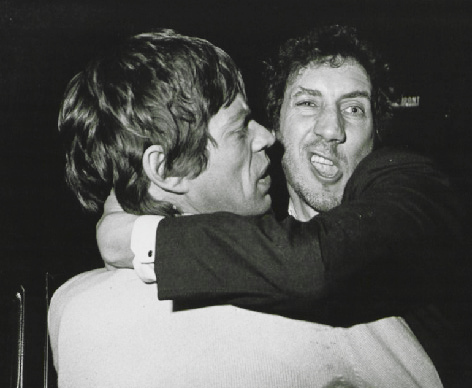 Quote
harlem shuffle
No i have not seen The Who,i could have if i wanted too,in Norway years ago.But no,i dont like one single song from them.I think they are dreadful boring.

Wow, not even Baba?

This is gaining quite a bit of momentum in UK news this morning.

Either Daltrey has another album or book coming out or he's losing it. What's the point in slagging another band off. Quite pathetic really.

The comments were made to new video streaming service Coda Collection but have been picked up several UK newspapers and the N.M.E.

This is from The Daily Mail.


The Who's Roger Daltrey hits out at The Rolling Stones and labels them a 'mediocre pub band'... weeks after Paul McCartney snidely branded the rockers 'a blues cover band'


The Who star Roger Daltrey has hit out at The Rolling Stones, explosively labelling the iconic rockers a 'mediocre pub band'.

The singer, 77, didn't hold back when giving his opinion of the rock group's quality of music, despite the Stones being among the best-selling artists of all time.

Speaking to the Coda Collection, Roger was asked about The Who's contemporaries including the Stones and Led Zeppelin.

His comments come just weeks after fellow music legend Paul McCartney said the group were 'a blues cover band' and insisted his group The Beatles were better, in yet another barbed attack on the rockers.

Discussing frontman Mick Jagger, Roger said: 'You've got to take your hat off to him. He's the number one rock 'n' roll performer.

He then added: 'But as a band, if you were outside a pub and you heard that music coming out of a pub some night, you'd think, "Well, that's a mediocre pub band!"'

Despite their commercial success, the group have drawn criticism from others in the past including The Beatles' Sir Paul, who has made a string of explosive comments about the fellow rockers - all peppered with loose compliments.

Speaking to The New Yorker last month, he said: 'I'm not sure I should say it, but they're a blues cover band, that's sort of what the Stones are. I think our net was cast a bit wider than theirs', in regard to the two groups.

Following the comments, Mick hit back during a performance at SoFi Stadium in Inglewood, California on 14 October, where he made a responsive dig.

In between songs, Mick took the time to jab Paul over his recent controversial comments while naming many of the famous people in attendance.

The founding member of The Rolling Stones said: 'Paul McCartney is here, he's going to help us, he's going to join us in the blues cover later on.'
Regardless he did go on to name over A-listers in attendance including Megan Fox, Leonardo DiCaprio, Lady Gaga, and California Governor Gavin Newsom who received thunderous boos.

In another interview with Howard Stern last year, Paul said he thought The Beatles were a better band overall. He said: 'They are rooted in the blues. When they are writing stuff, it has to do with the blues. [The Beatles] had a little more influences...

'There's a lot of differences, and I love the Stones, but I'm with you. The Beatles were better. I've always said [The Beatles are better that The Rolling Stones]...

'But the thing is the Stones are a fantastic group. I go to see them every time they come out. They're a great, great band.'

He elaborated on some of the differences between the two iconic British bands and went on to talk about how the band's were great friends despite always trying to one-up each other when it came to new material.

'We still are [friends] and we admire each other,' he said, before adding that he thought their rivalry 'was kind of cool.'

The Beatles have long been regarded the most influential band of all-time, while the Rolling Stones earned the moniker of being the greatest rock 'n' roll band.

Mick was later asked about Paul's comments during an interview with Zane Lowe. He said: 'That's so funny. He's a sweetheart. There's obviously no competition.

'The big difference, though, is and sort of slightly seriously, is that The Rolling Stones is a big concert band in other decades and other areas when The Beatles never even did an arena tour, Madison Square Garden with a decent sound system.

'They broke up before that business started, the touring business for real. One band is unbelievably luckily still playing in stadiums, and then the other band doesn't exist.'

Mick also noted how The Beatles played a concert at New York's Shea Stadium in 1965, while The Rolling Stones 'started stadium gigs in the 1970s and are still doing them now.'

He said: 'That's the real big difference between these two bands. One band is unbelievably luckily, still playing in stadiums and then the other band doesn't exist.'

Just another accolade then.

Options: Reply To This Message•Quote This Message
Re: The Rolling Stones are a "mediocre pub band" says Roger Daltrey
Posted by: slane82 ()
Date: November 16, 2021 13:53
Saw this at the weekend:

“Come and sit down!” he says, beckoning me over with a smile that’s immensely charming, but also clearly not to be messed with":

[www.ft.com]
Options: Reply To This Message•Quote This Message
Re: The Rolling Stones are a "mediocre pub band" says Roger Daltrey
Posted by: slane82 ()
Date: November 16, 2021 13:58
The rivalry between these 60s groups isn't really news. A Daltrey comment from 1982: [youtu.be]

Quote
slane82
The rivalry between these 60s groups isn't really news. A Daltrey comment from 1982: [youtu.be]

Edited 1 time(s). Last edit at 2021-11-16 16:54 by triceratops.
Options: Reply To This Message•Quote This Message
Re: The Rolling Stones are a "mediocre pub band" says Roger Daltrey
Posted by: treaclefingers ()
Date: November 16, 2021 16:56
There's an insecurity that's evident in people that have to shoot others down...it somehow lifts them up.

These (minor) 'attacks' from Daltrey & McCartney are completely unprovoked...you never hear them coming from Mick.

MJ on the other hand goes out of his way to defend, famous example of that is challenging the reporter who slagged Dylan's singing.

Options: Reply To This Message•Quote This Message
Re: The Rolling Stones are a "mediocre pub band" says Roger Daltrey
Posted by: EddieByword ()
Date: November 16, 2021 18:00
Those two (McCratney & daltrey) must be getting senile making comments like that............It's like saying, Brazil, is a Sunday league team.............just idiotic.

well, Mick did say McCratney was a f ucking w anker.
Options: Reply To This Message•Quote This Message
Re: The Rolling Stones are a "mediocre pub band" says Roger Daltrey
Posted by: Stoneage ()
Date: November 16, 2021 19:03
-

And mr. Daltrey is right in many ways; Rolling Stones is not a band consisting of great mucians; and they can sound terrible at times.
These days, it's all so "straight" , the opening show of 2021 being one example; it is pretty good.

It is kind of weird though, I'd like to see more civility between these elders of rock - we were blessed to have all three bands "invade" America in the 60s.