Amazing to think that between them, Beck and Macca have won a total of 24 Grammys - 8 for Beck and 18 for Paul.
Personally I wouldn't think the original version of Pauls new album is Grammy-worthy, but given all the overwhelming rave/positive reviews it received in the press and eleswhere,
wouldn't surprise me if he wins another - or at least a nomination. And maybe this new collaborative version of the album will be nominated as well - could end up a double whammy Grammy for Paul.

Another one of the older guys who has been lucky in the voice dept. is Alice Cooper - his voice sounds pretty much identical to the old days to my ears - the sad part is I haven't liked any of his stuff since Welcome To My Nightmare so ... -

Another one of the older guys who has been lucky in the voice dept. is Alice Cooper - his voice sounds pretty much identical to the old days to my ears - the sad part is I haven't liked any of his stuff since Welcome To My Nightmare so ... -

Quote
DGA35
When I saw McCartney Summer 2019 in Vancouver, I'd read earlier reports of his voice not being too good. I was pleasantly surprised at the concert, it sounded good. Same as The Who in late 2019, the last show I've seen. Daltrey's voice sounded good.
Bruce Dickenson from Iron Maiden still sounds good as does Rob Halford from Judas Priest.

Daltrey's vocals were exceptionally great at both of the fantastic Hollywood Bowl Who shows I attended in 2019 - in fact the entire band was exceptionally great both nights.
And I saw Iron Maiden a few years earlier at the L.A. Forum, and Bruce Dickinson howled like a banshee throughout the night running around like a wild man.
Granted, at 62 he's still a spring chicken and nowhere near as old as any of the really old fogie rockers, but he is a survivor of throat cancer. Bruce

edit: Forgot to mention Daltrey's great and powerful performances at both Desert Trip weekends - sort of made both Paul and Mick's performances appear as the weakest links of the weekends.

Quote
shadooby
Man I love Paul, always have but he's really struggling vocally over the last 10-15 years or so. God bless him.

Very true. Some of his performances have been, ahem, disappointing.

That said... Went to see him when he was last in Melbourne, and I had vanishingly low expectations. Went with neighbours who "wanted to see a Beatle".

But, apart from a very few moments, he was really really good.

But your basic point is correct.

--
Captain Corella
50+ Years a Fan
Options: Reply To This Message•Quote This Message
Re: OT: Paul McCartney - "New" album and other Macca stuff
Posted by: cowboytoast ()
Date: March 26, 2021 02:39
yep i forgot about Steven Tyler - he still sounds pretty much the same too - haven't heard any new Fogerty-

I bought Paul's Egypt Station a few weeks ago used but I just couldn't get into it - I'm going to give it another spin and try - this last couple weeks I've been trying to compile my own compilation of these new outtakes like many of us here are -
Options: Reply To This Message•Quote This Message
Re: OT: Paul McCartney - "New" album and other Macca stuff
Posted by: Hairball ()
Date: March 26, 2021 02:46

The last Paul cd I bought was the greatest hits compilation Wingspan about 20 years ago, and really can't go wrong with that give or take a couple of silly tunes.
I've enjoyed a random occasional new tune or two from albums of his over the last few decades, but never enough to buy an entire album/cd, and I don't think I could name any of the titles.
I came close to buying this latest one, but I guess it sort of slipped my mind as things sometimes do, and pretty sure it can all be heard on youtube...ultimately was never a big Paul solo fan anyways.

I've never lived in a world without Paul and Mick and the boys -
Options: Reply To This Message•Quote This Message
Re: OT: Paul McCartney - "New" album and other Macca stuff
Posted by: Hairball ()
Date: March 26, 2021 04:02
I'm not too much older than you cowboytoast, and being born in '63 I've never lived in a world without the Beatles and Stones either.
I also had an older bro, but he was just four years older than me, and I used to sponge everything off of him whether he knew it or not...including pinching from his stash of weed.lol
Back on topic, I recall buying Paul's Red Rose Speedway album when I was nine in '73 - sort of an underrated/under the radar album, but had the big hit My Love...still like that song as it takes me right back.

Beck has shared his take on Paul McCartney‘s ‘Find My Way’, after recording the track for a re-worked version of ‘McCartney III’.
The singer’s new cover is the second track to emerge from the album, after Dominic Fike previously debuted a hypnotic cover of ‘The Kiss of Venus’.
While the funk-laden core of the track remains intact, the new offering sees Beck providing vocals and McCartney on guitar duties.

Explaining how the remix initially came about in an interview on Zane Lowe’s Apple Music 1 show, Beck said: “He [McCartney] just sent me that particular tune, so I just went right into it. The way I work with remixes is I’ll take the vocal and then I’ll just start from scratch. “I’ll just build a whole new song. And that particular song, I actually changed it from major to minor, so I had to do a little bit of altering, but I think it served the groove a bit. “And also Paul did the album himself as well, playing on the instruments. So it’s sort of done in the spirit of the record that he made. I think that’s what is great about remixes is to completely take liberties and take the song completely somewhere unexpected.”

He also opened up on the first time he met McCartney in the early 2000s. “I think Nigel Godrich, who’s produced a few of my records, was doing a record with him,” Beck said. “So I went to go hang out with them in the studio a few times and got to learn things they were working on that never came out. He’s a legend, and over the years we’ve hung out. We did a Rock and Roll Hall of Fame thing. Been up to the house before, he’s the greatest.”

In a four-star review of McCartney III, NME‘s Mark Beaumont called it “a stellar return to his three-decade-spanning series”. He added: “If future archaeologists take this three-album series as a significant marker of his solo half-century, they’ll conclude that Paul McCartney never stopped liberating.” Last month, McCartney announced a career-spanning book about his life through 154 songs from his back catalogue.

And a statement from Beck:

"I remember hanging out with Paul and his wife Nancy several years ago and Nancy mentioned that she wanted to go out dancing before calling it a night. We ended up at some club in West Hollywood and I remember noticing that Paul and Nancy were TEARING IT UP—really enjoying themselves more than anyone else on the dance floor. Last year when he asked me to remix this track, I remembered that night and wanted to try to recapture that amazing spirit I felt while watching him on the dance floor… sort of my little tribute to Paul “in his groove.” When I then heard the falsetto vocal in Paul’s original track I wanted to lean further into something really loose and funky—I pulled out my Hofner (because of course) and put down a few bass lines… and everything came to life from there. The best part of the entire experience, though, came a week after I’d turned in the remix, when Paul called to tell me he’d been dancing in his kitchen to the track all week." - Beck 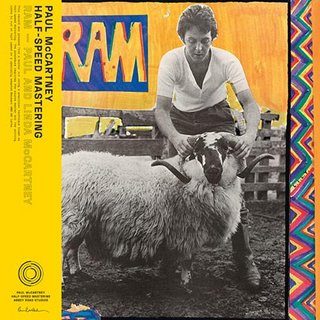 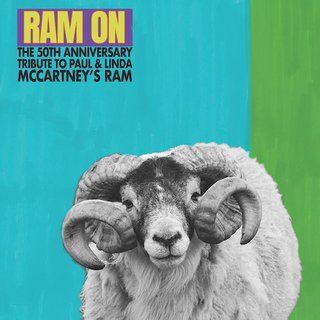 RAM ON - 14-May-2021 (CD only) - Tribute-Album: RAM has been covered in its entirety by a collective of musicians - [www.SuperDeluxeEdition.com] .

I gave McCartney III another spin yesterday. It's a very good album that makes an enjoyable listen. "Seize The Day" grew on me. "Pretty Boys" is the only track I skip.

I hope "IIImagined" leads to some collaborations between Paul and any or all of those other artists. I think that would be really interesting. Paul's pretty good at co-writing songs, ya know.
Options: Reply To This Message•Quote This Message
Re: OT: Paul McCartney - "New" album and other Macca stuff
Posted by: Hairball ()
Date: April 7, 2021 20:18
I thought the original version of Slidin' was pretty good and edgy coming from good old Macca,
but this new 'Imagined' remix with Radiohead guitar player Ed O'brien takes it to another level of intensity.

ROCKMAN
Options: Reply To This Message•Quote This Message
Re: OT: Paul McCartney - "New" album and other Macca stuff
Posted by: Hairball ()
Date: April 8, 2021 01:56

Quote
gotdablouse
Dunno, apart from clicking on x1.25 and turning the volume know to 15 and creating this horrible distortion all over I'm not sure what this achieves. I'm surprised Dave Grohl wasn't drafted in for that track.

Never been much of a fan of Radiohead, but guitarist Ed O'brien gives this tune a rougher/contemporary edge - reminds me a bit of some crazy good Industrial rock ala Ministry
Speaking of Dave Grohl, kind of surprised he's not on any of the Imagined tracks, but he's already had several collaborations with Paul in the past both studio and on stage. I suppose Paul preferred to keep this all fresh.

Quote
Hairball
Never been much of a fan of Radiohead, but guitarist Ed O'brien gives this tune a rougher/contemporary edge - reminds me a bit of some crazy good Industrial rock ala Ministry
Speaking of Dave Grohl, kind of surprised he's not on any of the Imagined tracks, but he's already had several collaborations with Paul in the past both studio and on stage. I suppose Paul preferred to keep this all fresh.

It seems to me Paul is in a way expanding on what Lil Nas X did in keeping "Old Town Road" on the charts with a long string of remixes. It also echoes back to "Thrillington" Paul's reimagining of "Ram". Someone on the YouTube comments for the "Slidin" remix also hoped that these tracks might open the door for collaborations with some or all of these artists. Conceptually it would make for an interesting set of three albums and continue the motif.

I like this version of "Slidin". It does sound modern, and has both a heavy feel and a lighter touch on the chorus. I don't know if I say it's the strongest of the three tracks released so far. I look forward to hearing it in the context of the whole record.
Options: Reply To This Message•Quote This Message
Goto Page: PreviousFirst...4647484950515253545556
Current Page: 56 of 56