Yesterday there was already something about Huntlington NY dec 27th

Anybody have seen these dates too ?
Options: Reply To This Message•Quote This Message
Re: Tour 2013 : Coachella is announced on mobile App
Posted by: Max'sKansasCity ()
Date: December 14, 2012 17:03
There must be an app for that.... maybe an app to get the app?

Let us know if you evber get the real info, Coachella is pretty cool
Options: Reply To This Message•Quote This Message
Re: Tour 2013 : Coachella is announced on mobile App
Posted by: MarcJ ()
Date: December 14, 2012 17:29
This is the official Rolling Stones Mobile App for i-Phone 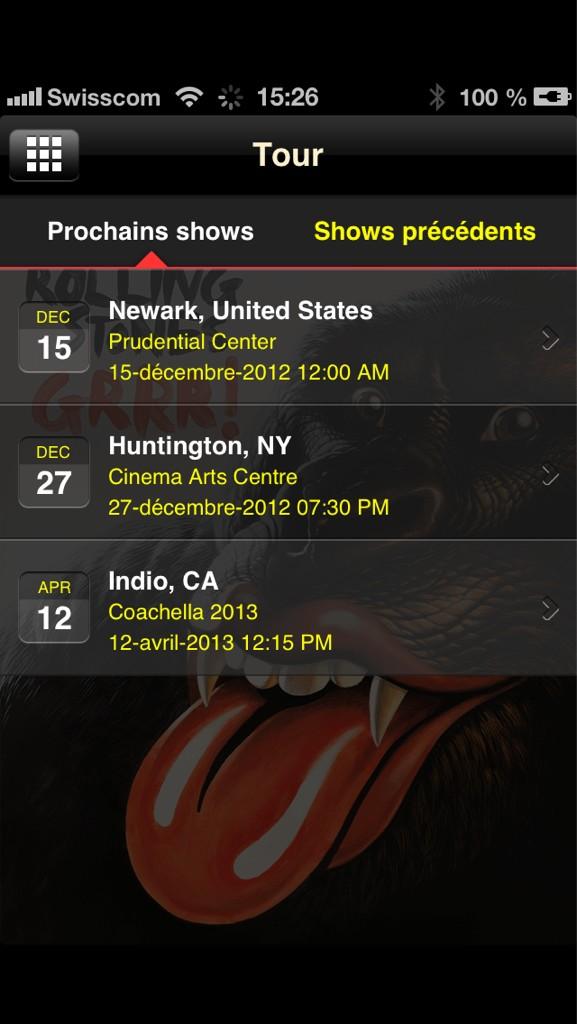 Options: Reply To This Message•Quote This Message
Re: Tour 2013 : Coachella is announced on mobile App
Posted by: Cocaine Eyes ()
Date: December 14, 2012 17:34
Is there an app for old folks who don't have the app, don't want the app and don't even know what the freakin' app is?

Options: Reply To This Message•Quote This Message
Re: Tour 2013 : Coachella is announced on mobile App
Posted by: Irix ()
Date: December 14, 2012 17:35
On the Android-App is at the moment only one upcoming tour date: 15 Dec. Newark Prudential Center.

Some minutes ago there was still the film screening on 27 Dec. at Huntington NY Cinema Arts Centre visible, now it's gone.

No Coachella on the Android-App at the moment. Maybe a mistake or tomorrow at the Pay-per-View is more to come .....

"I've got nasty habits I take tea at three"
Options: Reply To This Message•Quote This Message
Re: Tour 2013 : Coachella is announced on mobile App
Posted by: chop ()
Date: December 14, 2012 17:44
What's coachella? Sounds like a bus service

The Rolling Stones will not be playing the 2013 Glastonbury Festival in England, say sources close to the band. British tabloid The Sun feuled the rumor by publishing a story saying that the Stones were close to signing a deal to perform at the festival. It's true that Stones were invited to perform at Glastonbury, but it's not true that they are close to signing a deal, and the band won't be performing at the festival in 2013.

The Coachella Festival is notorious for this kind of publicity stunt. The Rolling Stones have never played at Coachella and have no plans to do so, but that hasn't stopped rumors from spreading every year that the Rolling Stones are "close to signing a deal" to perform at the festival. And these rumors are spread even when the band isn't on tour the year that the Stones will supposedly play at the festival. It's unrealistic that Stones would end a hiatus just to play at a festival in which they are one of many acts on the bill.

Here's what an unnamed source told The Sun about the Stones performing at Glastonbury in 2013: “The band are gearing up for a load of live dates but tend to leave big decisions like this until the last minute. Michael Eavis is desperate to get the band confirmed and has made initial contact with their people. It would be a massive coup to get the band playing Glasto on what could be their last round of live dates. Getting a decision from the whole band can be tough and at the moment they are without an agent for live shows, which is not helping the situation. But there is a good chance 2013 will finally be the year they make it.”

Take that information for whatever you think it's worth. Until an official announcement is made about the Stones doing concerts in 2013, it's best to be skeptical of these tabloid stories. As of now, the Rolling Stones have not confirmed any concert dates for 2013.
Options: Reply To This Message•Quote This Message
Re: Tour 2013 : Coachella is announced on mobile App
Posted by: Max'sKansasCity ()
Date: December 14, 2012 18:00

Thanks though... could be a sign of things to come.

It also 'means' theyre playing a show in a cinema in Huntingdon, NY on December 27th, in case you hadnt noticed.

Thanks though... could be a sign of things to come.

I agree this may be an unintentional clue. My prediction (hope) for 2013.

After a nice long holiday season break the Stones announce a series of shows (with Mick Taylor) in LA to take place around the time of the grammies (Feb 10). And then a series of shows/mini tours during Feb, March & April in 5-10 cities around the world (Like they did in London and are doing in NY/NJ). Then a few festivals in US and Europe over the summer.

I have no sources - this is just my speculation based on how things seem to be playing out.

btw - it's obvious Mick is calling the shots (and I love Keith, Charlie & Ronnie so this is no knock on them) and is the brains and driver behind this great 50th anniversary mini-tour. He's smart enough not to commit or go public with any bigger plans before he knows they can handle it (and before the ppv and NJ/NY ticket sales are done). I know most people here do realize how talented he is, but I think we sometimes don't realize how unique he is. Incredible talent, incredible energy, incredible brains, all uniquely mixed together with a "f*ck it all" bravado.
Options: Reply To This Message•Quote This Message
Re: Tour 2013 : Coachella is announced on mobile App
Posted by: Gazza ()
Date: December 14, 2012 18:30

Quote
MarcJ
There is an another thread about the Huntington news

Calling it 'news' is a bit of a stretch, Marc.

The 'Stones for Coachella' thing comes up every year. Even when theyre not on tour.

Quote
MarcJ
ok I was just sharing some information from the official Rolling Stones Application.I still believe this source was valuable, but forget it.

I appreciate you posting the info you did Marc, at least you are trying to help us. Donr be disuaded by anyone.... Keep on posting this type of stuff, the more the better..... because people who do know, dont tell.... and that is fine I understand the soruces will stop telling them if they spill... but why particupate in specualtion, when they KNOW? I am surprised there was not more reaction to this post.
Options: Reply To This Message•Quote This Message
Re: Tour 2013 : Coachella is announced on mobile App
Posted by: Nasty Habits ()
Date: December 14, 2012 21:37
Yeah it has now come up on my app to. Looks like it could actually be happening.